If you have any problems, check here to see if your problem is answered.
(Note: This will strictly answer only PKSV-UI related problems. If your A-map is not working or such, it won't be found here).

Problem 1: I can't compile my script!


A: Most likely, you have multiple copies of PKSV-UI opened. The compiler won't know which script to compile. Close all of your PKSV-UI scripts, open the one you want to change/compile, and try again.

A: You forgot to include the dynamic offset. Simply add '#dyn 0x740000', or some similar hex number at the very beginning of your script. 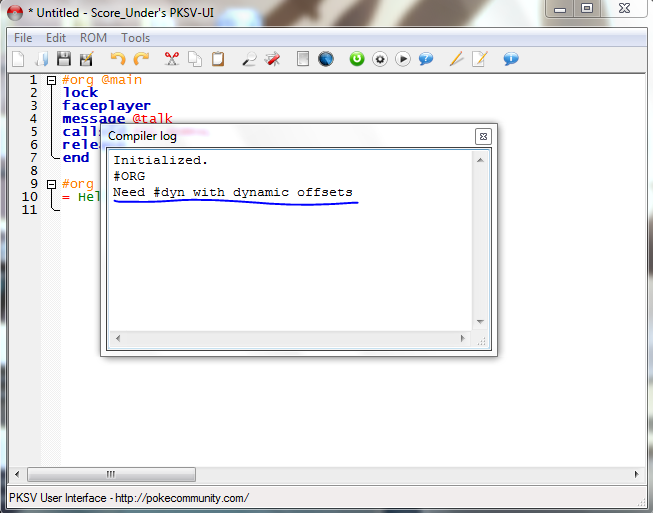 Problem 3: I saved A-map with my new script, NPC, ect., but the game doesn't have the changes.

A: Most likely, you are using save states. Save states capture the exact moment of the game you were playing on, so all of the data it captures will be BEFORE you changed the game. I recommend using the manual saving option. That way, you don't always have to start from the annoying intro screen.

Problem 4: Sometimes I edit my script, and I paste the offset, but when I use 'Open Script', the script never shows my changes.

A: I have no idea why this happens. When something like this happens, the best thing to do is to use rewrite everything. Copy/Paste is not recommended, since it seems to 'copy' the error as well. Remember, always edit your original script. Don't add the changes from the script you get by clicking 'Open Script'.


Problem 5: I wrote my script, compiled it, and copy/pasted the offset into A-Map. When I click on 'Open Script', the script is blank!


A: If you are using the older version of A-map, 1.92, this will never happen. However, in the newer versions, I don't know why, but the offsets have an extra 2 zeros. Make sure you do not touch the first 2 zeros, and only paste over the other ones.


If you have any problems not listed above, tell me, and I'll add it here.